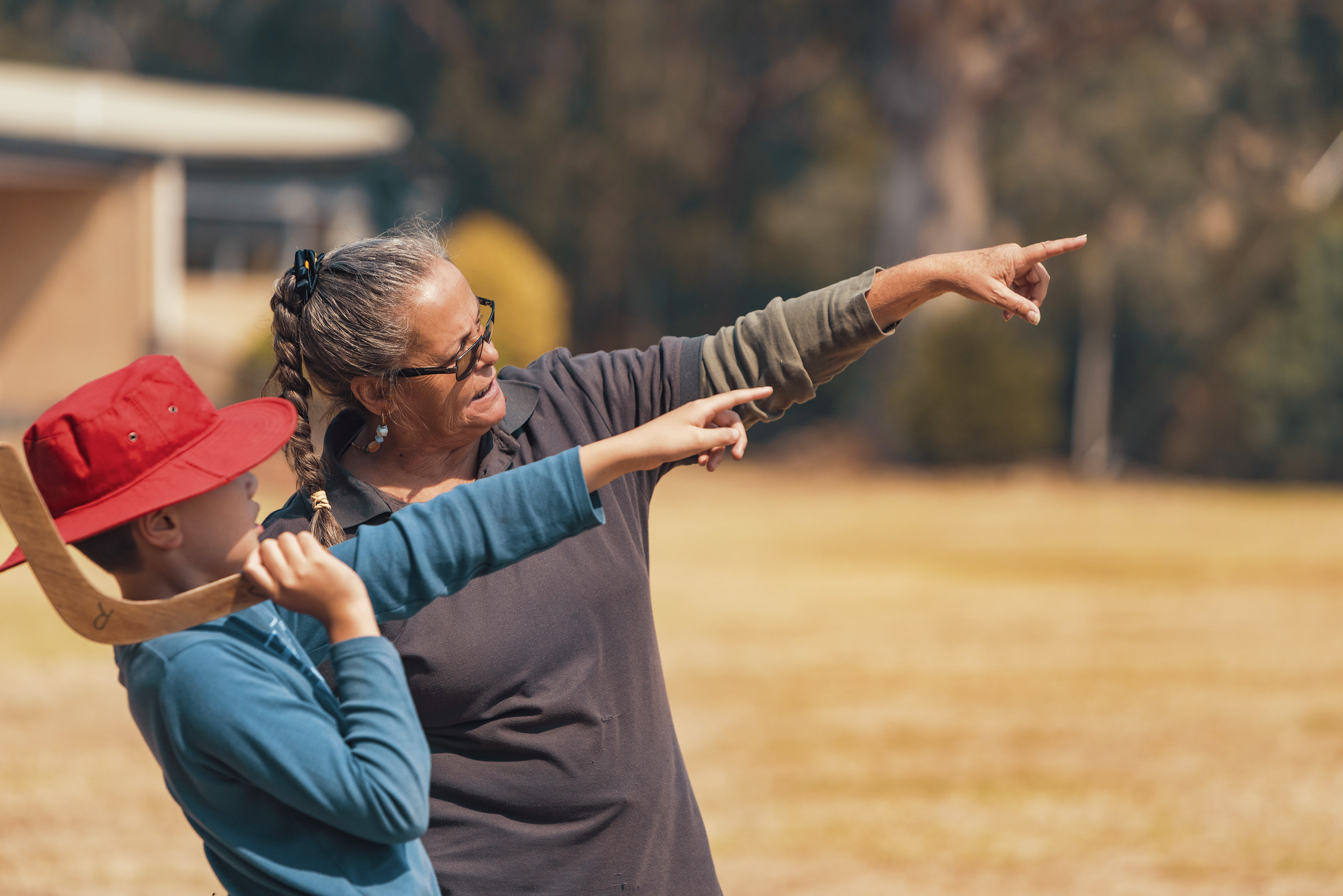 Immersing our students in Indigenous culture not only enhances their learning but it’s also a curriculum requirement. The Australian curriculum affirms Aboriginal education is a priority in all states, allowing students to explore significance and meaning from Indigenous perspectives. Teachers are called to extend young people’s knowledge beyond post-colonial history, broadening their minds to over 65,000 years of rich cultural history, society and tradition.

Bodies including the Victorian Aboriginal Education Association and the Aboriginal Education Consultative Group provide teaching protocols, ensuring educators teach in a culturally-sensitive manner. When developing cultural programs and curricula, consultations with the land’s traditional owners are endorsed. Attempts to broaden language and history beyond Eurocentric viewpoints are welcomed.

Outdoor education not only engages young people with the natural world but also connects them with the intricate, ancient history belonging to it—becoming a dimensional learning experience. When also considering Indigenous peoples’ profound relationship with their land, outdoor education proves to be the perfect avenue for showcasing Australia’s Indigenous history.

The Victorian state government has woven cultural education throughout all its courses—from English to Health/PE. Highly developed and specific, the curriculum intends for students to respectfully engage directly with history and culture in natural environments; it suggests students engage with outdoor activities to establish an understanding of their own and Indigenous connection to land, highlighting the intrinsic connection between outdoor education and cultural studies.

Likewise, New South Wales has been running cross-curriculum cultural content since 2003. Incorporated into all core subjects, the objective is to develop an understanding of both historical and contemporary Indigenous culture. Teachers are instructed to share the complex relationship First Nations People have with Country, including both historical and built sites.

Western Australia’s cultural curriculum follows the guidelines established by The Alice Springs (Mparntwe) Education Declaration, developed by Education Ministers who identified the learning needs of the future. As a result, the state established its Aboriginal and Torres Strait Islander Histories and Culture Priority. A cross-curriculum initiative, schools aim to deepen students’ knowledge of Australia by “engaging them with one of the oldest living cultures”. In addition to developing their historical understanding, students are led to explore contemporary Indigenous communities, gaining an insight into the contemporary lives of Indigenous Australians.

While being a deeply sombre history, the Western Australian curriculum aims to highlight how Indigenous culture is a source of strength and resilience; the cultural framework does this by focusing on themes of personal identity and its interconnection with country and culture.

A PATH TOWARDS LASTING RECONCILIATION

When students engage with Indigenous history, their historical knowledge is extended to include over 65,000 years of complex religions, rituals, long-distance trade and art. Too few Australian adults are aware of the rich complexity of Indigenous culture due to its long-term exclusion from our textbooks and national identity.

Through education, teachers are not only developing the minds of students, a path is paved towards lasting reconciliation. The Australian Bureau of Statistics has reported there are just under 800,000 Indigenous Australians and counting, with the number expected to grow in the coming years. Despite this, The Australian National University revealed 75% of Australians have an unconscious and implicit bias against Australia’s Indigenous community. Sharing Indigenous culture with students assists in creating a more empathetic and inclusive future, giving our students the toolkit to understand and embrace diversity.

A way we can be inclusive of Indigenous Australians is with an Acknowledgement of Country. While appearing quite simple, it has always been a vital part of Indigenous culture. When we have visitors, whether it be close family or distant friends—we warmly greet them. Likewise, a Welcome to Country is a welcome to one’s home.

Engaging in cultural traditions, such as a Welcome to Country, allows Australians to better recognise and understand diversity.

At The Outdoor Education Group, we aim to preserve and honour the Traditional Owners and practices on the land we use to deliver outdoor education. Notably, two of our camp locations have a strong focus on developing cultural awareness in students.

Located in the lush Rubicon Valley, Victoria’s Camp Jungai is the ideal first step into your students’ life-long cultural education journeys. Home to the Taungurung people, the local community was known for being adept hunters and builders; their skills are, in fact, still being passed on today. We consult with local Indigenous leaders to develop insightful and engaging experiences. With students, we make use of the native River Mint plant’s medicinal properties to create bushfood and insect repellent. Jungai in the Taungurung native language translates to ‘meeting place’, highlighting the welcoming ambience of the sacred land. The Indigenous focus at Camp Jungai is truly the centrepiece of the camp’s programs, celebrating the link between the outdoors and its rich history. 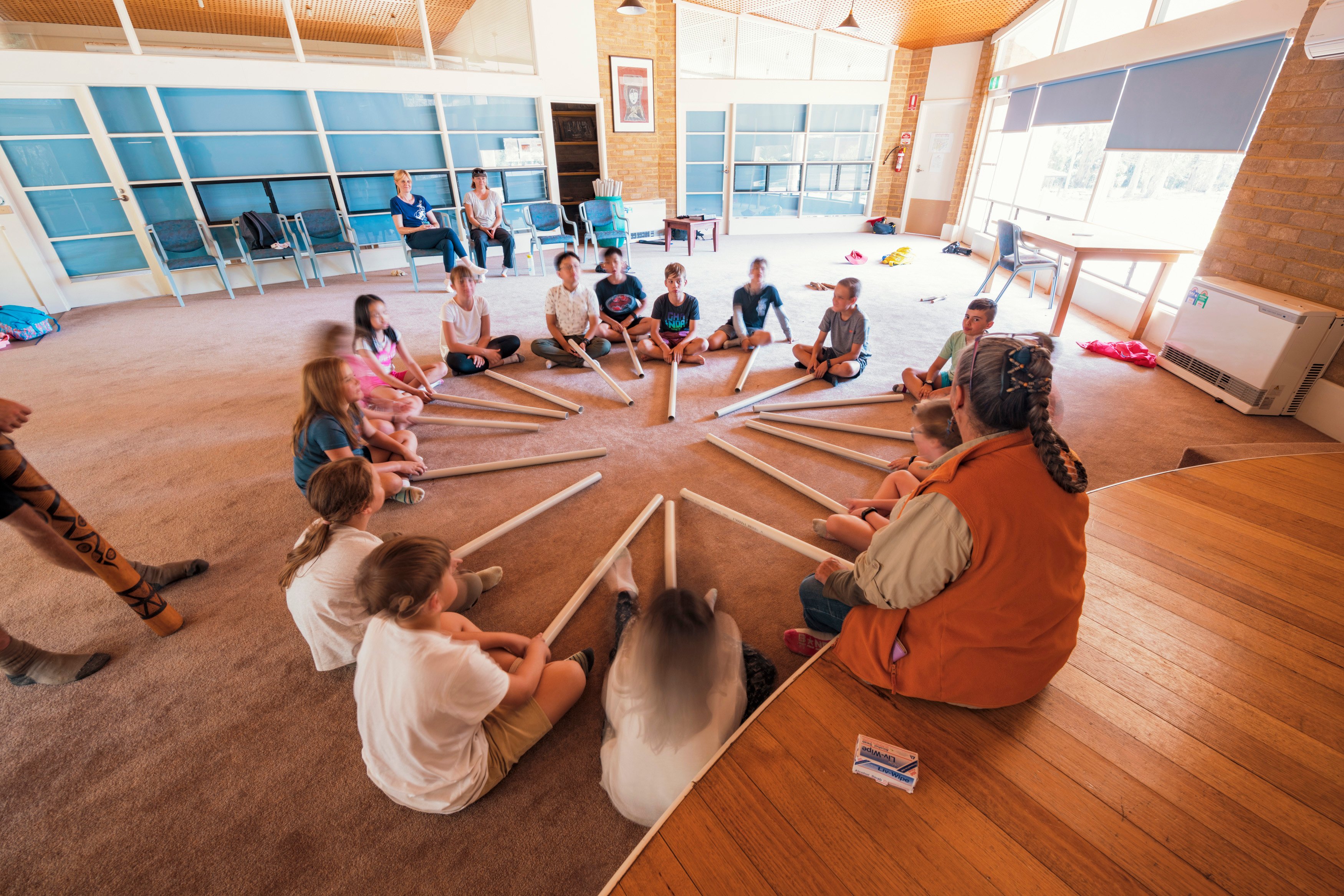 Up at Jabiru in the Northern Territory, we work in partnership with the local Mirarr people to develop conscious and specific cultural experiences at camp. During our NT programs, students are introduced with a Welcome to Country and seminar, exploring cultural differences, including within communication and relationships. We aim to recognise and share Indigenous history, preserving it in the hearts and minds of Australian youth.

The Mirarr have a deeply complex culture, with most of the population speaking more than one Indigenous language. Prior to 2017, it was widely accepted that Indigenous people lived in Australia for 45,000 years; this changed when research was conducted on a rock shelter on Mirarr Country, proving they have been in Australia for far longer at 65,000+ years.

The Outdoor Education Group collaborates with the Gundjeihmi Aboriginal Corporation, an organisation established by the Mirarr in 1998 to represent the community’s rights; this particularly concerns the sustainable development of their land, which was exploited and under threat for 40 years in the 20th century. The spiritual land of the Mirarr was overrun by uranium mining to the distress of the traditional landowners. As those responsible for the land, the community had concern over the potential health and safety impacts mining brings. After several demonstrations, protests and even a documentary, the area is now formally protected as a National Park.

Jefferey Lee, a senior Traditional Owner, witnessed the introduction of the bill which protects his land. The following is his story in the fight to protect his Country:

Giving students a meaningful outdoor education experience can plant the seed for their lifelong Indigenous education journey. Indigenous writer Tony Birch has said, “there is no starting place and no end. Just read, watch, look and listen to everything you can”. Learning about cultures different to our own, building empathy and deconstructing subconscious bias is an eternal, yet rewarding, journey.

While Indigenous education in the classroom is valuable, placing students in traditional landscapes allows them to experience the connection between land and culture firsthand; these experiences encourage students to develop empathy, gaining insight into unfamiliar cultural beliefs. Outdoor education allows students to witness the beauty of Indigenous land and culture alongside their peers and the Indigenous community. Not only developing historical knowledge and empathy on an individual level, our programs set the groundwork for building a more inclusive and equitable Australia.

PREPARING OUR CAMPS FOR BUSHFIRE SEASON

Australia’s natural beauty is unlike any other. Our country’s varied landscapes and landforms have...
read more
Insider

SUPPORTING EACH OTHER IN THE FIELD OVER A CUP OF COFFEE

At The Outdoor Education Group, we ensure all those who join us outdoors, including our visiting...
read more